An afternoon of talks, story sharing, digitisation opportunities, and curatorial tours relating to our current exhibition Dutch Journeys to the Western Edge.

In Western Australia how have Dutch explorers, migrant artists and artists of Dutch descent communicated their experiences of this place? Based on my curatorial research and associated publications this talk includes a panorama of visual, material and emotional encounters from ship to shore.

Share and record your perspectives on being Dutch in Western Australia. Your words will be added to the State Library’s heritage collection to enrich the items donated to the Library by Nonja Peters. The recordings will also be featured in the future online version of the exhibition.

Bring along some of your old family photographs and start building your own digital archive. State Library staff will assist you to scan your photographs, providing you with digital copies for the long term preservation of your images.

Marjorie Bly from the National Archives of Australia will be on hand to help you research your Dutch heritage. She will be able to offer hints and tips on tracing your Dutch family history.

Join Nonja Peters as she takes you on a tour of the exhibition: Dutch Journeys to the Western Edge.

From Dirk Hartog’s landing at remote Cape Inscription in 1616 to our present migrant connections, Dutch Journeys to the Western Edge draws stories from the collections in the State Library. Whether seeking trade, refuge or opportunity the Dutch, like others to land on our shores, have helped shape Western Australia Dutch Journeys to the Western Edge is on display in the State Library until 25 September 2016. For more information visit our website

Each year, the State Library of Western Australia contributes hundreds of Western Australian websites to PANDORA, Australia’s web archive. PANDORA is a world class web archive established by the National Library of Australia in 1996.  It is built collaboratively by 11 cultural institutions across the country, with SLWA contributing Western Australian content to this ever-growing national archive.  Websites are selected for their significance, their authority or research value, their representation of social or topical issues, and also to reflect the diversity of our state. These can include the websites of organisations, community groups, individuals, festivals, events, and sites about various topical and political issues, election campaigns, interests and activities. 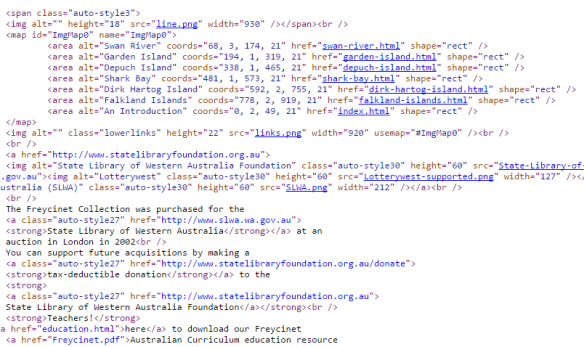 Web archiving involves selecting, copying (but only with the permission of the website owner!), quality checking and preserving specific websites.  For copyright reasons, SLWA can only archive a website if the website owner has given permission, so we will always contact the website publisher to ask permission before we archive.  Once archived, the live website may continue to change or eventually disappear, but the archived instance will remain as it was at the time it was captured.  The average lifespan of web content is difficult to determine, but various estimates suggest that an individual webpage may last on average as little as 100 days. That means that an awful lot of Western Australia’s web presence may be at risk of disappearing at any one time. 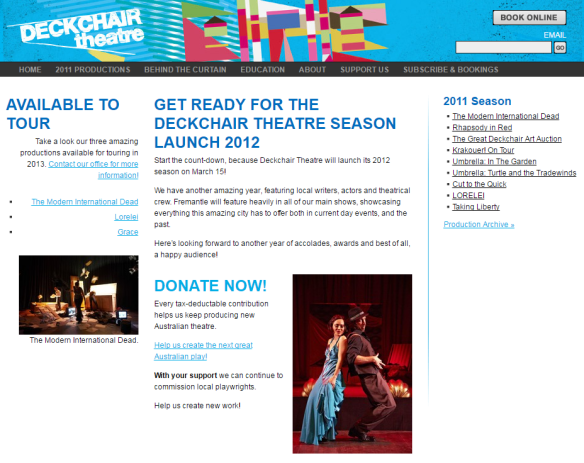 Many of the websites preserved by SLWA are no longer in existence.  For example, we archived the website of the Deckchair Theatre company from 2008, with the final snapshot captured just a few months before the theatre closed in 2012.  We archived websites related to the Commonwealth Heads of Government Meeting held in Perth in 2011, including the official website and the 2011 Commonwealth Festival, which showcased arts and culture in Western Australia at the same time.  These sites lasted until at least 2013, interestingly, but were eventually shut down as they had outlived their immediate usefulness to their creators.  Less attractive perhaps, but just as important historically (and legally), are the websites of the WA health practitioners registration boards – Psychologists, Dentists, Occupational Therapists, Medical Radiation Technologists etc. – which ceased to operate between 2010 and 2012 when national registration came into effect.

Web archiving also preserves changes in information and design over time. Below is how the websites of three state political parties looked at the time of the 2001 WA state election. 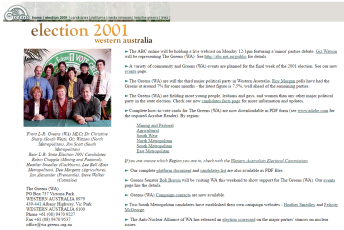 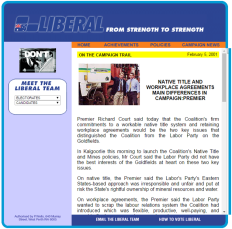 Compared to similar websites even during the 2008 state election and 2013 state election, they look very dated today, but that was the current state of the art in web design. With state and federal elections looming in the coming months, SLWA web archivists are already gearing themselves up to capture and preserve the next wave of election-related websites.

The web is an integral part of contemporary life, and increasingly contains information and content that cannot be found in any other medium. By capturing Western Australian websites we are helping to preserve our digital history, culture and experience. 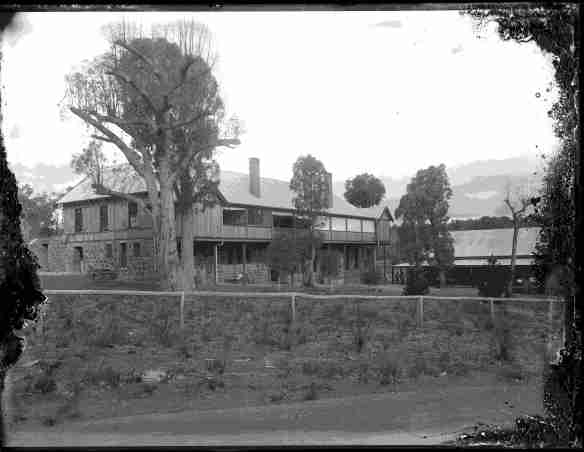 A part of the St Andrew’s Convalescent Home for soldiers, Kalamunda which is now St Brigid’s College Lesmurdie.

The western side, and only completed section, of a building originally planned as a school by Herbert Parry and built for Archibald Sanderson MLC on his Lesmurdie Estate. In 1919 the property and some adjacent land was purchased by the Commonwealth Government and converted into a convalescent home for returned soldiers. The original plans were adapted and the entire building completed with the eastern side in the “Dutch Colonial” style and based on Cecil Rhodes home in South Africa. (See photograph, drawings and article published in the Western Mail 11 April 1919, p.24 (p.23 in Trove) and p.29).

See photograph from the 1920s here.

Can anyone assist us with the location of, and any information about, this stone and timber property?

This image is a part of a collection of Dr. J. S. Battye’s glass negatives taken between 1910 and 1920.  Many photographs in this collection were taken by E. L. Mitchell but there is nothing on the negative to identify the photographer or the subject.

We are always delighted to receive further information about the images in the State Library photographic collections.

To respond please click into the speech bubble just above the photograph. 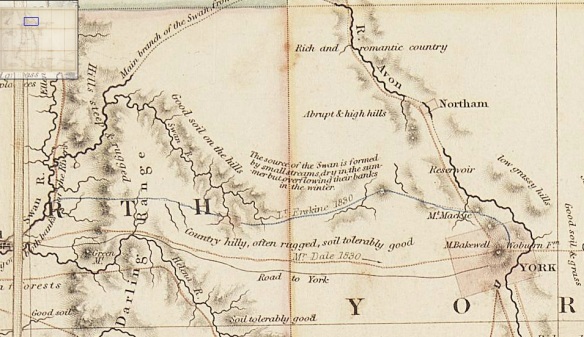 Discoveries in Western Australia: from documents furnished to the Colonial Office by J.S Roe, Esqre. b1775631

Many maps are objects of beauty, works of art in their own right, or marvellous in their precision and attention to detail…

but have you ever thought how maps can assist you with your family history?

The State Library and the State Records Office have large collections of maps and plans. These can be used to locate and trace the history of a house or commercial property. For residences built in the Perth area during the first half of the twentieth century you may even discover house plans.

Townsite plans may include numbered allotments, sometimes named.  You will be able to see how built up an area was at a particular time. Group Settlement plans show individual properties.  The Lands and Surveys chain series maps often give the names of land owners. 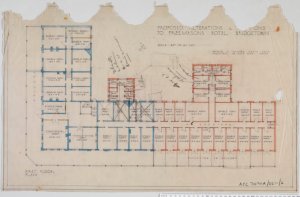 Railway maps may tell you when the railway arrived at a particular town.  Some plans show lots, streets and buildings surrounding stations, and land resumption information.

Electoral maps show the boundaries down to which electoral district a street was in. Road maps show street name changes and indicate how built-up a suburb was during the period it was produced. 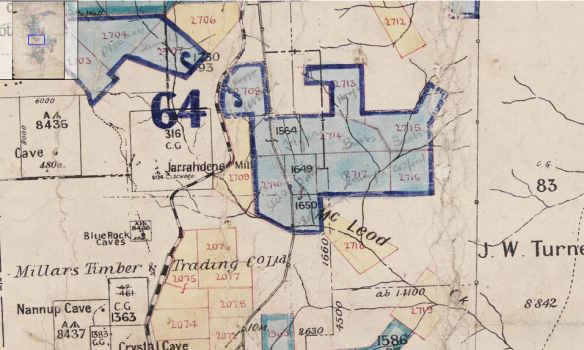 Exploration maps may include the first documented comment on the local countryside.

There are maps indicating mining leases, collections of real estate plans and much more.

You are invited to join us on Thursday 27th August for a day exploring our map collections. We will also be including a talk on how to get the most out of an oral history with a family member.

Where the hell are we? – speaker Steve Howell

Don’t put it off! Why you should record your family stories now – speaker Susanna Iuliano.

The Family History Subject Specialists will be out and about over the next two weeks. We will be giving talks at Warnbro and Fremantle Public Libraries. 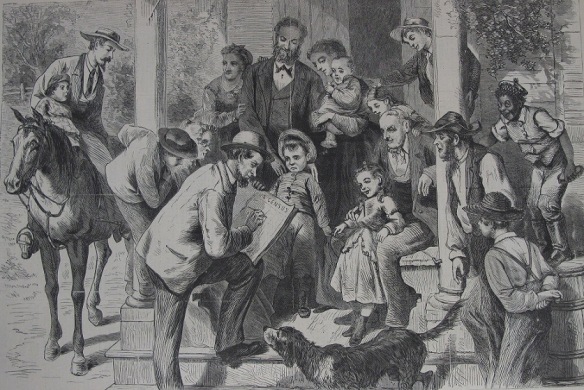 Taking the census. From a sketch by Thomas Worth, Harpers Weekly 19 Nov 1870

Warnbro – Black and White and Read all Over
One of the most exciting developments for family history researchers is the rapidly expanding collection of digitised newspapers available. For family historians who think that they have reached the limits of what they can reasonably expect to discover about their forebears, think again!
The State Library subscribes to digitised historic newspaper archives from Australia, the United Kingdom, Ireland and the United States. These are all available to search from home to members of the State Library.
Warnbro Community Library, Swallowtail Parade, Warnbro
Wednesday 6th May 10.30am – 12pm
Bookings essential: 9528 8577
wclcontact@rockingham.wa.gov.au 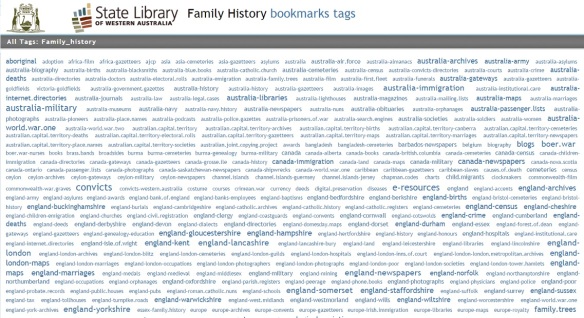 Fremantle – Catalogue conundrums and website whimsies
Have you ever struggled to find what you are looking for in our catalogue or website? This talk introduces some of the family history resources we have at the State Library and how to find them. Whether it is our blog, Facebook page, subject guides, bookmarks, eresources, catalogued items or private archives – you are sure to discover resources you were not aware of. See some of the wonderful items we have digitised and learn a few tricks along the way.
Fremantle  City Library, 8 William Street, Fremantle
Tuesday 12 May 2.30pm – 4pm
Bookings essential: 9432 9739
lhc@fremantle.wa.gov.au

For those researching their WA families, their home towns or historic events in Western Australia, Trove provides a window into the past.
Hosted by the National Library of Australia, Trove is the portal to Australian online resources including books, images, historic newspapers, maps, music and archives. The most popular part of Trove is the Digitised newspapers and more section, an historical collection of searchable city and rural newspapers from around Australia.
Eight new Western Australian newspaper titles covering the period 1877 – 1954 have recently been added to Trove.
They are:
Eastern Districts Chronicle (York:  1877 – 1927)
Great Southern Herald (Katanning:  1901 – 1954)
Norseman Times (1898 – 1920)
The Pilbarra Goldfield News (Marble Bar:  1897 – 1923)
South Western Advertiser (Perth:  1910 – 1954)
The South-Western News (Busselton:  1903 – 1949)
Toodyay Herald (1912 – 1954)
Westralian Worker (Perth: 1900 – 1951)

Unlike many historical newspaper databases from overseas Trove is free to access – so follow our link and start your historical journey now!
Trove digitised newspapers and more.

The State Library of Western Australia is located in the heart of the Perth Cultural Centre. It preserves and provides access to Western Australia’s published heritage and original historical records.

The State Library also provides numerous on-line and e-resources, many of which are accessible from home using your public library membership.

All contents copyright © State Library of Western Australia. With the exception of coats of arms, emblems, images, other third party material or devices protected by a trademark, the content of this website is licensed under a Creative Commons Australia Attribution Non Commercial Share Alike 3.0 Licence.

SLWA encourages readers of this blog to post comments however we will remove any comments that are unsuitable, offensive, defamatory or of a political nature.

All Family History Bookmarks by our Expert Librarians